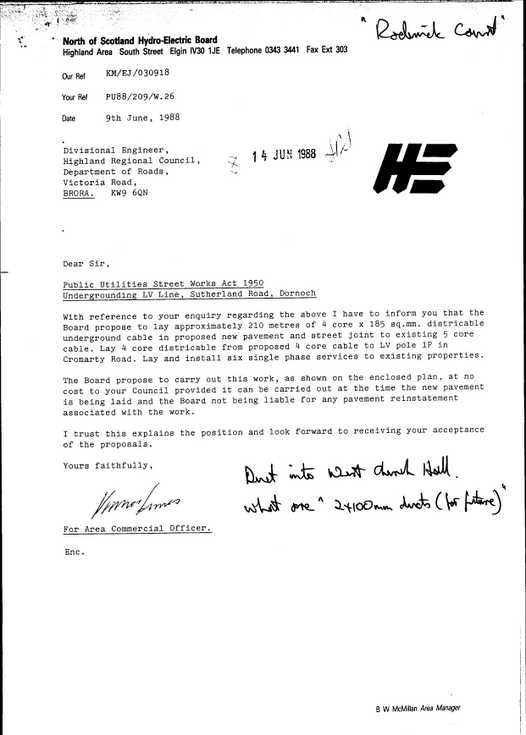 Copies Public Utilities documents, consisting of 3 letters and 1 single page 'Proposals for British Telecom Plant' concerning the provision of public utility works consequent to the improvements to Sutherland Road. The first, is a letter dated 9th June 1988, addressed to the Divisional Engineer, Highland Regional Council from the North of Scotland Hydro-Electric Board with the subject title 'Public Utilities Street Works Act 1950 - Underground LV Line, Sutherland Road, Dornoch'. The letter provides details of the laying of underground cables in the proposed new pavement and road, plus six single phase services to existing properties. It is stated that the proposed work would be "at no cost to your Council provided it can be carried out at the time the new pavement is being laid and the Board not being liable for any pavement reinstatement associated with the work". The second letter dated 20th April 1988 from the Highland Council Divisional Engineer to the Divisional Engineer, Department of Roads & Transport draws attention to an existing underground sewage pipe and surface boxes and the third letter dated 3rd April 1989, between the same parties, concerns implications with respect to the integrity of the water main, listing diversion, excavation and mains laying and associated requirements.