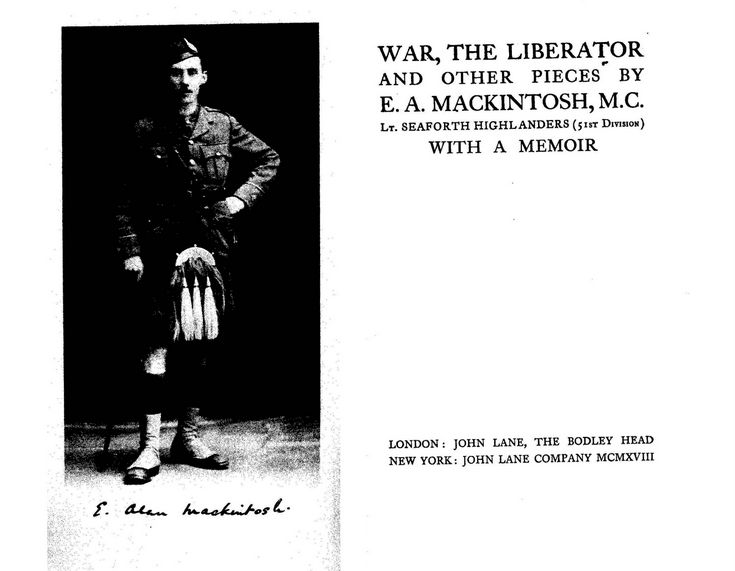 Eight page extract from 'War the Liberator and other pieces by E A Mackintosh MC - Lt Seaforth Highlanders (51st Division) With a Memoir' published in London by John Lane, The Bodley Head, New York: John Lane Company, MCMXVIII'. The principal extract is the Memoir, written by John Murray, Christ Church, Oxford in April 1918, which provides insight to Alan's education, at Brighton College and Christ Church, Oxford, followed by his joining the 5th Seaforths as a subaltern at Christmas 1914. After training at Golspie he crossed to France with his battalion in July 1915. He was awarded the Military Cross in May 1916 and returned to England in August 1916 having been wounded and gassed at High Wood. For eight months he taught bombing to the corps of cadets at Cambridge. While at Cambridge he became engaged to Sylvia Marsh, daughter of a Quaker family, with whose traditions and ideals he had much in common. They planned to make their home in New Zealand. In October 1917 he returned to France, joining the 4th Battalion, Seaforth Highlanders and in fighting about Cambrai he fell shot through the head. The extract also includes poems: 'Recruiting' and 'Death'.;