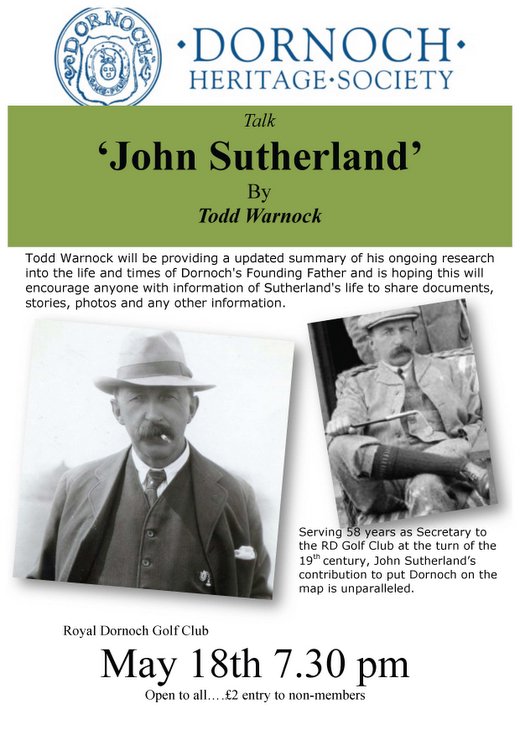 He spoke with passion, admiration and a great depth of knowledge about the man who served as the Secretary of the Royal Dornoch Golf Club from 1883 to 1841, a period of fifty-eight years. In addition to his duties at the Club, John Sutherland was also Dornoch's Town Clerk from 1924 to 1941. Although he was best known for his work relating to the growth of the Club, he was also one of the pioneers in golf course architecture and was involved in laying out several courses including one for Andrew Carnegie at Skibo.

Sutherland saw the talent in the young man Donald Ross, employing him at the Club, and it was here that Ross honed his skills prior to his emigration to the US in 1899 where he went on to become one of the most successful golf course architects. While Donald Ross served as green-keeper at Royal Dornoch, he and Sutherland would often walk the course at night and talk about what improvements could be made.

Sutherland also wrote a golf column for a London newspaper, The Daily News, under the name “Golf Causerie.” A causerie is an informal article or talk. This weekly column was hand written and sent by mail from Dornoch to the London paper ensuring it's arrival in time for publication. A book of his articles was published in 2016 under the title of Golf Causerie.

In 1933, John Sutherland was publicly honoured in recognition of his valued services to the Golf Club and in his capacity as Secretary for over fifty years, during which the course developed to be one of the finest in the country with well in excess of one hundred of its' members living in London but making regular trips North to play on the links. The public honour also acknowledged his major contribution towards the welfare and development of the community at large during his time as Town Clerk. He was quoted as having said, "We are a Cathedral city. - A Royal Burgh with a Charter granted by Charles1, a Bishop's Palace and a links waiting to be developed."