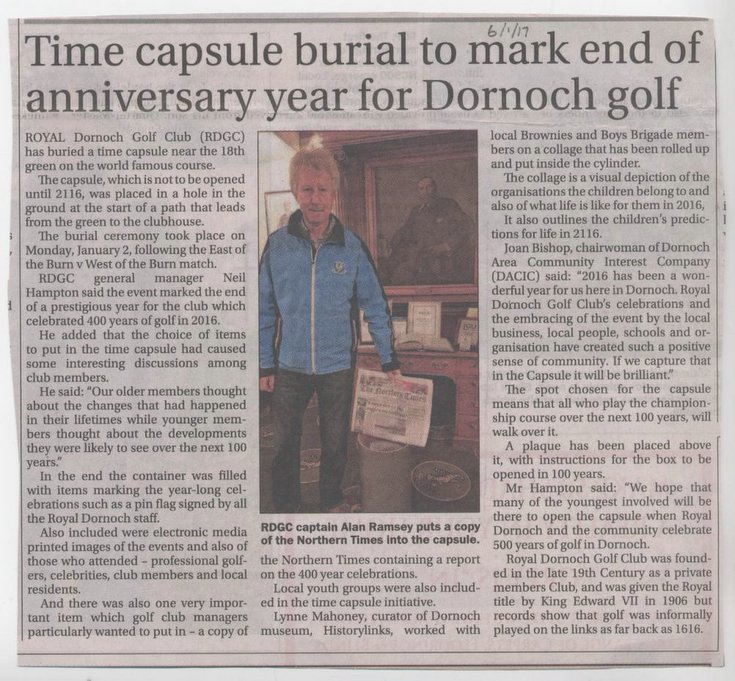 Extract from the Northern Times of 6 January 2017 covering the Royal Dornoch Golf Club burial of a time capsule to mark the end of a prestigious year for the club which celebrated 400 years of golf in 2016. The burial ceremony took place on 2 January 2017 and the capsule, which was placed in a hole in the ground at the start of a path that leads from the 18th green to the clubhouse, is not be opened until 2116. Local youth clubs were included in the time capsule initiative, with local Brownies and Boys Brigade members working with Historylinks Curator Lynne Mahoney to produce a collage, rolled up and placed in the container. The choice of items in the time capsule caused some interesting discussions but in the end the container was filled with items marking the year-long celebrations, such as a pin flag signed by all the Royal Dornoch staff, electronic media and printed images of events and those attending. The accompanying photograph shows the RDGC captain Alan Ramsey with a copy of the Northern Times containing a report on the 400 year celebrations which was placed in the container.
Picture added on 08 March 2017 at 15:16